This video, featuring Brother David, a highly-respected Benedictine monk, author and spiritual leader, is a BLESSING to all those with “eyes to see and ears to hear.” Look, listen and be inspired by this powerful message on grateful living. “A Good Day” With Brother David Steindl-Rast

The gift of today is Gratefulness. If you treat this day as if it is your first day as well as your last day, you would have spent this day very well. Be grateful for this day right now. Open your heart to this incredible gift that is today.

A Gift of Gratitude

Originally created as an ‘alchemical wisdom” montage featuring the Godfather of the Gratitude Movement, Brother David Steindl-Rast speaking over a customized musical soundtrack, in a blend created by Wisdom of the World Founder, Composer/Producer Gary Malkin. This touching audio track was given to world class cinematographer, Louie Schwartzberg to set to his astonishingly beautiful visual artistry.

Presented unassumingly during a SF TEDX talk. This short film became a viral internet sensation. Reaching more than 7 million people worldwide, and still growing. This genre was first explored in the globally acclaimed palliative care resource, Graceful Passages, with music composed by Malkin and produced by Malkin with Michael Stillwater.

Many people experience this short film as a morning alignment tool. Others as a reminder of what matters most during life challenges. However you use it, it’s great to remember that the greatest state of consciousness we humans can ever be in is a state of gratitude. When that happens, we are overflowing with compassion and a willingness to serve the greater good. 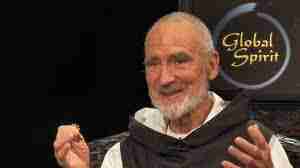 Brother David Steindl-Rast was born in Vienna, Austria. Brother David holds a PhD from the Psychological Institute at the University of Vienna. After 12 years of training in the 1,500-year-old Benedictine monastic tradition, Brother David received permission to practice Zen with Buddhist masters. An international lecturer and author, Brother David is a leader in the monastic renewal movement. He also is the dialogue between Eastern and Western religions.