How a Penny Made Me Feel Like a Millionaire

As a young child, Tania Luna left her home in post-Chernobyl Ukraine to take asylum in the US. And one day, on the floor of the New York homeless shelter where she and her family lived, she found a penny. She has never again felt so rich. A meditation on the bittersweet joys of childhood — and how to hold them in mind.

How a Penny Made Me Feel Like a Millionaire

Growing up with very poor, Tania Luna was impacted by the Chernobyl accident, spends a year in the hospital but the silver lining was that her family gets asylum to the United States.

With expectations of rare and wonderful things: such as banana’s, chocolate, and Bazooka bubble gum which she would get once a year and chew on for a week.

At the age of six, the first day they arrive in New York, she and her grandmother found a penny on the floor of the homeless shelter they are staying in, although they thought they were in a hotel with lots of rats.

They figured the penny was left behind by a very wealthy man since regular people just don’t lose money. She holds the penny in the palm of her hand and to her if feels like she is holding a fortune.

She decides that she will by her very own piece of bubble gum. And in that moment she feels like a millionaire.  A year later she gets the same feeling when they find a bag of toys in a dumpster and she had more toys than she had in her entire life. Another story of eat her first pizza that was mistakenly delivered to the apartment and they could not afford, “but the pizza is delicious.”

Ten years later her family wishes to celebrate by renting a room at the hotel they first stayed in when arriving to the U.S. The man at the front desk laughed and says they can’t reserve a room here this is a homeless shelter, and they were shocked.

Her husband, Brian, was also homeless in his childhood and had a treasure box of comic books and GI Joe’s painted like Spiderman. It was his own assembly of hero’s that kept him from giving up on his dreams. 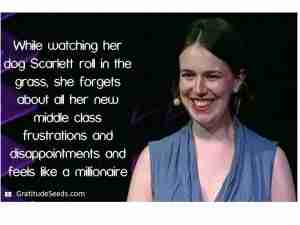 They rescued their dog Scarlett who was previously used as bait for dog fights to make the other dogs more aggressive before they fought. Now these days, she eats organic food, sleeps on an orthopedic bed with her name on it, but when they pour water in her bowl she still looks up and wags her tail in Gratitude.

When they walk with Scarlett in the park and she rolls thru the grass, and they look at her and then each other and they feel Gratitude. They forget about all our new middle class frustrations and disappointments and they feel like millionaires.